Concept
Bâtard opened in Tribeca in May 2014, in the same space that used to be home to the famous Montrachet and then Corton.
If the word Bâtard evokes France (Bâtard-Montrachet is a Grand-Cru vineyard in Burgundy and a “bâtard” is also a French bread similar to baguette but shorter and wider), Bâtard is no French restaurant. The Chef Markus Glocker comes from Austria and his cuisine reflects both his heritage and his experience by some of the best chefs in Europe and the United States. Based on beautiful ingredients, classic flavors and new techniques, the menu feels at the same time simple, authentic, modern and elegant.
And you could use the same adjectives to describe the decor: Golden walls patterned with acorns and leaves, wooden bare tables and cozy banquettes make the perfect setting for Markus Glocker’s cuisine and set the tone of a refined and relaxed dining experience.

For whom
Food lovers in search of authentic flavors with a modern approach in a relaxed atmosphere.

Story
Markus Glocker grew up in Austria. As a teenager he spent his summers working in his uncle’s hotel and developed a passion for the culinary art. By the age of 15, he knew he wanted to become a Chef. After graduating from culinary school in Austria he worked for prestigious restaurants and chefs in Europe and the United States: restaurant Vier Jahreszeiten in Munich, 3 Michelin-starred restaurant Eckart-Witzigmann in Berlin, 2 Michelin-starred restaurant Steirereck in Vienna, Charlie Trotter’s in Chicago and Gordon Ramsay in London and New-York.
In 2014, Markus Glocker opened Bâtard in partnership with restaurateur Drew Nieporent and managing partner John Winterman. Among numerous stellar reviews. Bâtard received a 3-star rating from the New-York Times, 3 stars from New-York Magazine, 1 Michelin star, and was rewarded in May 2015 Best New Restaurant in America by the James Beard Foundation.

​​My experience
I experienced dinner at Bâtard on a Saturday night and was delighted by Markus Glocker’s cuisine and the relaxed and warm atmosphere of the restaurant.
I loved his expressive way of cooking based on superb ingredients that he sources carefully and tries to transform as little as possible. There is respect in his cuisine, as well as humility and precision. Respect for the ingredients and flavors to which he remains true, precision in the cooking process and the way he uses spices, sauce, seasoning and techniques.
I am still dreaming of the Coal Roasted Carrots, served with spiced goat cheese, pistachio, and champagne vinaigrette, and of the amazing texture and taste of the Scallop Crudo, served with avocado mousse, lime, radish and black sesame. The Smoked Trout Rillettes, accompanied by asparagus, quail egg and trout roe felt almost poetic. The Duck was perfection with its crispy skin and tender center beautifully prepared with Moroccan spice and berries. The Soufflé for two served with fruit, raspberry consommé and vanilla ice cream was light and fluffy and I almost had to fight my husband to get my share!
I am looking at their menu now and I’m one click away from reserving another table! 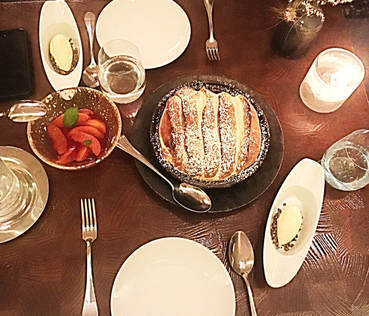