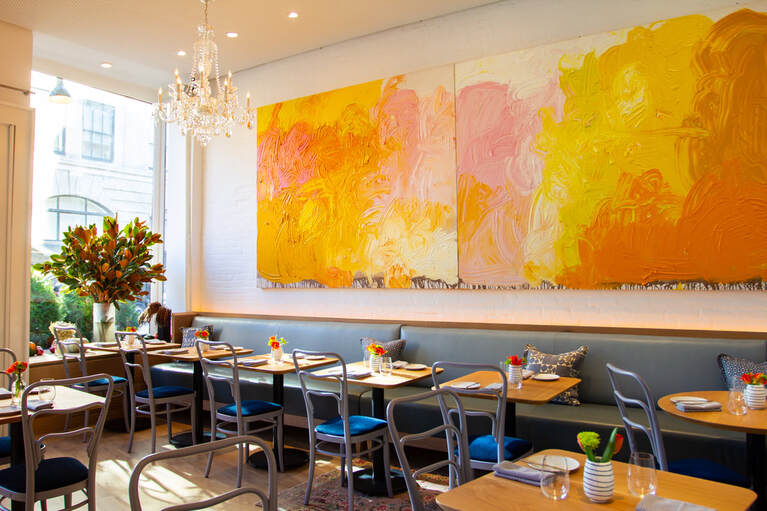 ​Modern Austrian Cuisine
Wallsé is Chef Kurt Gutenbrunner’s Michelin-starred restaurant located in the West Village of NYC, steps away from the High Line and the Hudson River Promenade.
If the name of the restaurant is a reference to the small Austrian village where Chef Gutenbrunner grew up, its style is the reflection of both his story and his passion for food and art.
These are two passions you’ll find omnipresent at Wallsé: in the cuisine which beautifully fuses Chef Gutenbrunner’s Austrian roots, his many experiences in Europe and New York and his artistic flair and taste for simplicity and modernity; as well as in the recently revamped 60-seat space, which couldn’t better reflect his culinary vision by melding elegance, subtly colored minimalism and art with an ever-changing collection of private pieces displayed on the walls.

For whom
Anybody in search of authentic flavors with a modern approach in an elegant and relaxed atmosphere. 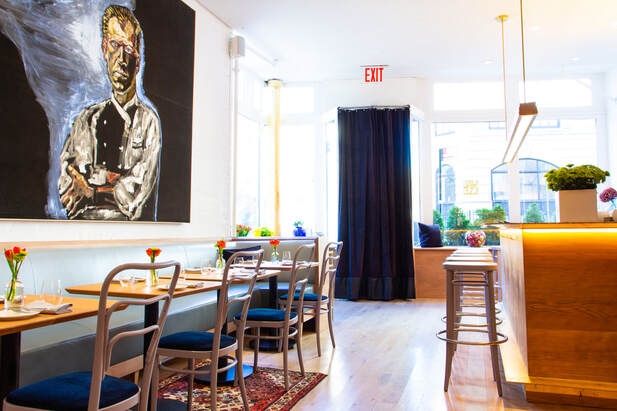 Photo Credit: Luke Leonard
​Story
Growing up with garden-fresh cooking in the small village of Wallsee, 80 miles west of Vienna, Kurt Gutenbrunner developed his culinary passion as a kid. At age 15, he decided he wanted to become a chef and started a culinary school from which he graduated two years later.
While he apprenticed at the Relais & Châteaux Richard Löwenherz in the Wachau Valley, he developed a taste for the wines of this region and took this opportunity to learn about them.
He then went to Switzerland to work at Crans Montan in the Wallis Valley and then came back to Austria to work at the Rotisserie Prinz Eugen alongside Chef Werner Matt who is known as a precursor of modern Austrian cuisine. After that, Chef Gutenbrunner worked at Michelin-three-star restaurant Tantris in Munich before coming to NYC to work at renowned restaurant Windows on the World, and then for acclaimed Chef David Bouley.
He went back to Europe for a few years and worked as Chef de Cuisine at Bistro Terrine in Germany and then at Mangostin, a contemporary Asian-influenced restaurant in Munich, before returning to NYC to work as Culinary Director at David Bouley. After working as Executive Chef at the famous Monkey Bar in NYC where his inspired seafood dishes became favorites, he decided it was time for him to open his own restaurant.
Wallsé opened its doors in July 2000. It was awarded a Michelin Star in 2006 and has maintained it ever since. 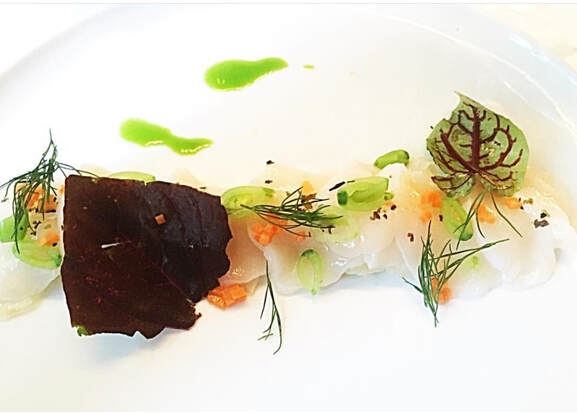 Scallop Ceviche, Sugar Snap Peas, Carrot, Fennel
My Experience
Wallsé is definitely one of my favorite restaurants in NYC. I have been there numerous times, always leaving enchanted with my experience.
I just love Chef Gutenbrunner’s cuisine inspired by his Austrian roots but also by beautiful products he obviously sources with great care.
His cuisine is precise and without artifice, it is creative and elegant without being pretentious. In the menu, whether choosing Austrian classics which Chef Gutenbrunner has reinterpreted or other dishes inspired by the season, you can tell that each creation has been meticulously thought out and executed, with just the right combination of flavors, textures and colors. The fish crudos for example are always a wonder. The first time I went I was amazed by a Scallop Ceviche prepared with sugar snap peas, carrot and fennel, and another night I was delighted with a Kampachi Crudo married with peas, tomato and cilantro. During spring, asparagus dishes are a must and I still clearly remember the divine taste of a White Asparagus Soup, served with a lobster ravioli, and the beauty and deliciousness of a simple plate of White Asparagus married with sorrel and lime Hollandaise. I will neither never forget an appetizer I had two years ago which was an egg yolk, beautifully circled by asparagus, chanterelle and celery. When it comes to entrees, the options on the menu are just as delightful. During my last visit I greatly appreciated the scallops, which arrived cooked to perfection accompanied by spring peas, maitake mushrooms and young carrots, and my husband was extremely pleased with the thyme-roasted lamb rack paired with artichokes, fiddlehead ferns and shallots.
​For dessert, my favorite is definitely the Salzburger Nockerl, a classic Austrian specialty, similar to a light, sweet soufflé.
​ 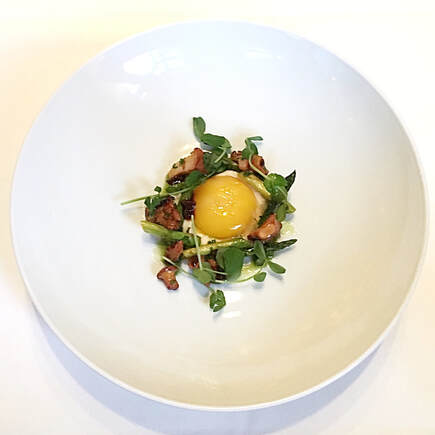 Egg Yolk, Green Asparagus, Chanterelles, Celery
Besides Chef Gutenbrunner’s beautiful cuisine, I love the relaxed yet elegant atmosphere of Wallsé. The dining room is divided into two different spaces, which helps create an intimate atmosphere and the service is always impeccable and friendly.
If you are like me a curious wine lover, there is doubtless no better place than Wallsé to explore Austrian wines as its wine list exclusively features Austrian wines with an impressive selection of treasures from the Wachau Valley.

At Wallsé, Chef Kurt Gutenbrunner has truly managed to meld his talent and story with his passions for food and art. Being there, you can feel that the pleasure he has to share them is doubtless what gives the restaurant its unique personality and soul. 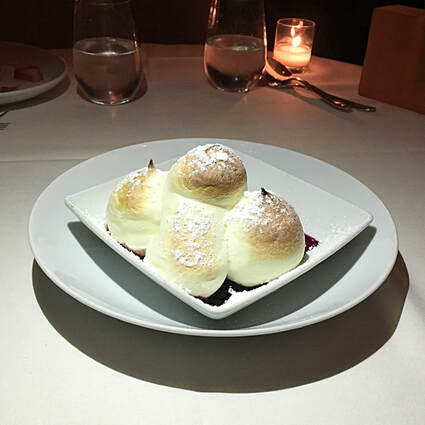