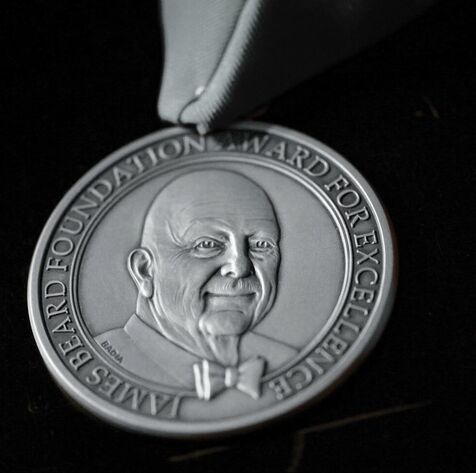 Photo courtesy of The James Beard Foundation
​For more than 30 years, The James Beard Foundation has been celebrating and highlighting the importance of food culture in the United States, giving chefs and other actors of the food scene “a voice and the tools they need to make the food world more delicious, diverse and sustainable”.
Since its creation, its scholarship program has distributed almost $8 million in financial aid to talented students needing funds to pursue their food and beverage studies.
Through the organization of unique dining experiences at the James Beard House in NYC and all around the United States, as well as conferences, summits, culinary labs and industry programs aimed at educating and addressing issues of the food system and culture, the James Beard Foundation has become a true platform for the culinary world, promoting “good food” and a better food world.

In 1991, the James Beard Foundation gave the first James Beard Foundation Awards, recognizing the talents and vision of chefs and other leaders making a difference on America’s food scene. These awards, which are held annually, cover nearly 60 categories, including Restaurants and Chefs, Restaurant Design and Media. The last media awards ceremony took place on Friday, April 26 in NYC: click here for the full list of winners.
The 2019 Leadership Awards will be held on Sunday, May 5 in Chicago and all the other winners will be revealed on Monday, May 6 during the James Beard Awards Gala, which will take place at the Lyric Opera of Chicago.
In the meantime, see the full list of the 2019 Restaurant and Chef James Beard Awards nominees below:

Outstanding Wine, Spirits, or Beer Producer
“A beer, wine, or spirits producer who demonstrates consistency and exceptional skill in his or her craft”:
Rising Star Chef of the Year
“A chef age 30 or younger who displays exceptional talent, character, and leadership ability, and who is likely to make a significant impact in years to come” :
Best Chefs in America
“Chefs who set high culinary standards and also demonstrate integrity and admirable leadership skills in their respective regions. A nominee may be from any kind of dining establishment but must have been working as a chef for at least five years, with the three most recent years spent in the region”.

The following honorees will accept their awards at the James Beard Awards Gala on May 6 at the Lyric Opera of Chicago: