​​Rendez-Vous with Christophe Dufossé
Owner and Chef at Maison Dufossé in Metz, France
​ 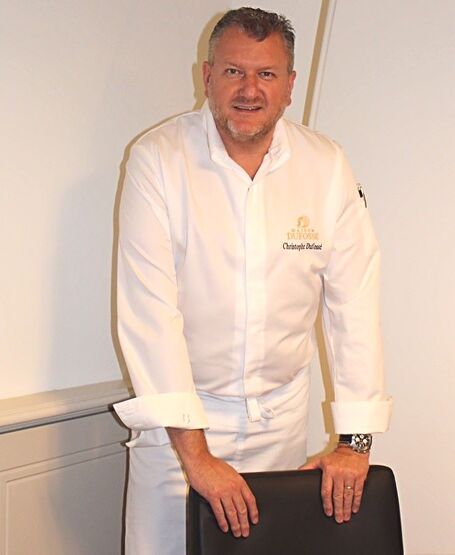 French version
Originally from Calais in the north of France, Christophe Dufossé and his wife, Delphine settled in Metz 15 years ago after buying La Citadelle, an imposing listed military fortress built in 1552.
Today, his group, Maison Dufossé includes a hotel (La Citadelle),  a Michelin-starred restaurant (La Table),  a brasserie, a grocery store and a catering arm.
A few weeks ago, Christophe Dufossé opened the doors of his universe to me and agreed to be interviewed.  It gave me a great opportunity to discuss the impressive career of this highly energetic chef who also has had a restaurant in Chengdu, China since 2009.

Did anything or anyone in particular inspire you to become a chef?
I was born in Calais in the north of France but my parents moved to Alsace when I was 7  years old.  That gave me the opportunity to spend a lot of time with my Alsatian grandmother who was not only a great cook but also an epicurean.  She gave me a sense of taste, certain values and allowed me to discover that the kitchen was my place.  At the age of  15 or 16, it was only natural that I moved towards culinary studies.
Cooking quickly became my passion and already at the age of 20, my dream was to have Michelin Stars.
Alain Ducasse has always been a role model for me in my career, as a chef of course but also as an entrepreneur.  I have a lot of admiration not only for everything he has built up but for him as a man with his sense of sharing, guidance and vision.

Once you had your diploma, what was your career path?
Once I had the diploma from Lycée Hotelier de Guebwiller, Alsace, I began to work for several seasons in prestigious establishments like Alain Ducasse’s Louis XV in Monaco, Paul Bocuse’s Michelin three-star restaurant in Lyon. L’Eden Roc in Antibes as well Byblos des Neiges* in Courchevel during the Olympic games.
I got my first role as Head Chef at the age of 29 in the restaurant of the Relais & Chateaux Royal Champagne in Epernay where I got my first Michelin Star after a year. This star opened doors for me and I was soon asked by Monsieur François Schneider then owner of Domaine de Roncemay in Bourgogne to be head Chef plus to manage the whole place with my wife Delphine. This comprised a golf course, spa, hotel and artisanal jam making business.  It was a great challenge which kept us busy for 4 years and was highlighted by a first Michelin Star for the gourmet restaurant.  It was at that moment that I launched the first Christophe Dufossé boutique which offered products such as foie gras, macarons, marshmallows and chocolates.
After four years my wife and I decided to take on a new challenge:  to invest in our own project.  After having visited several places in different regions in France, we fell under Metz’s and La Citadelle’s charm.  We arrived here in 2004 and after completely renovating the building under the direction of the architect Gérard Hypolite, we opened the doors to La Citadelle hotel and gourmet restaurant, Le Magasin aux Vivres** in 2005.  In 2006, one year after its opening, Le Magasin aux Vivres got its first Michelin star, which we have kept ever since.
*: Today Palace des Neiges
**: Today La Table 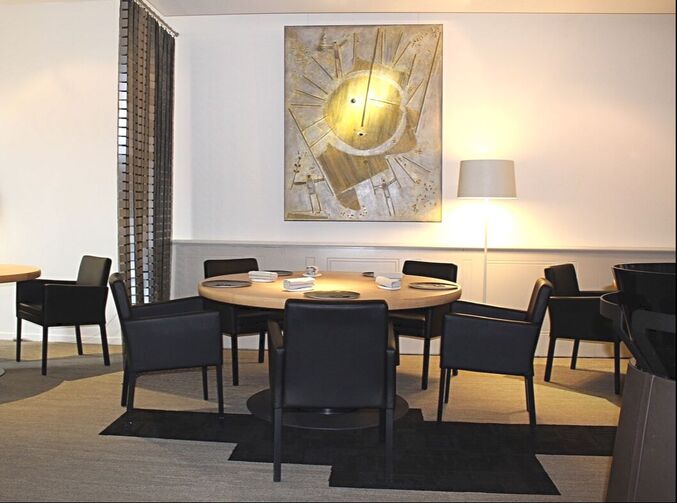 La Table, by Christope Dufossé
Maison Dufossé today includes a hotel, a gourmet restaurant, a brasserie, a grocery store and a caterer.  How do you see this little “empire” developing?
After the opening of the hotel and gourmet restaurant in 2005, we actually developed a catering arm in 2014 and opened La Brasserie within La Citadelle in the same year.  One year ago we rebranded the group which today is known as Maison Dufossé.  Our gourmet restaurant, Le Magasin aux Vivres changed its name to become La Table.
Our last was l’Épicerie in April 2019, a 600m2 concept store situated in Marly a few minutes from the centre of Metz which offers 1200 delicatessen lines, a bakery, a café, eat-in or takeaway, a wine shop and two workshops dedicated to cooking classes.  Our catering arm is now situated at the same address as the grocery store with a 1000m2 kitchen/lab and 1200m2 storage space.
Our big project for 2020 concerns mostly our hotel La Citadelle which is part of the MGallery collection with the Accord group.  This collection is regrouping around 100 boutique hotels which have unique characteristics in common be it their design or the story that they tell.  La Citadelle, which has 79 4-starred bedrooms , is going to be completely restructured in 2020 to give our guests even more comfort and to gain 5 stars.  The hotel will also have a spa and fitness room.  All the bedrooms will be renovated and suites will be added to the two existing ones.  We are also going to change the bar which will offer a short menu with some simple snack options such as club sandwiches or Caesar salad.  Our brasserie which has had a lot of success, will keep the same casual yet elegant spirit with a gourmet menu combining finesse, tradition and modernity at an accessible price.
Regarding La Table, our objective from the start is that of sharing and excellence.  My team and I give the best of ourselves every day and the positive reactions of our customers are our biggest reward.  Of course, the chefs that we are, hope to achieve a second Michelin star one day.​
​ 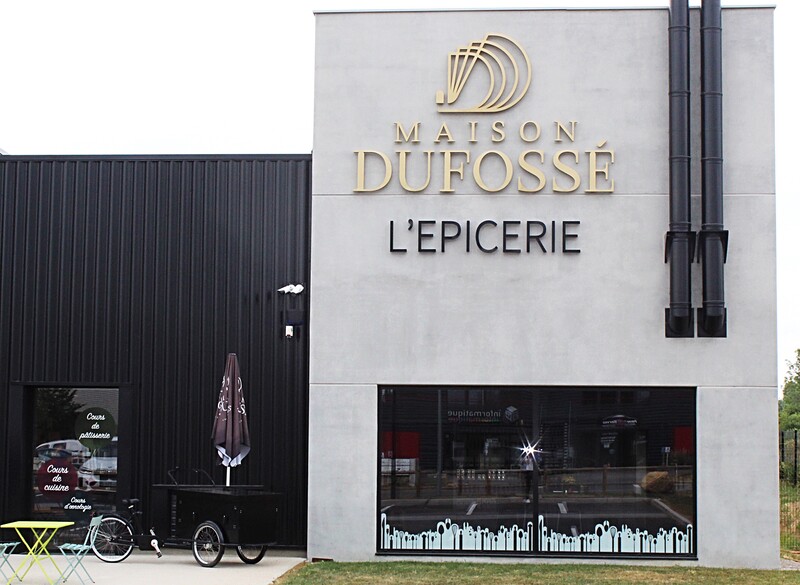 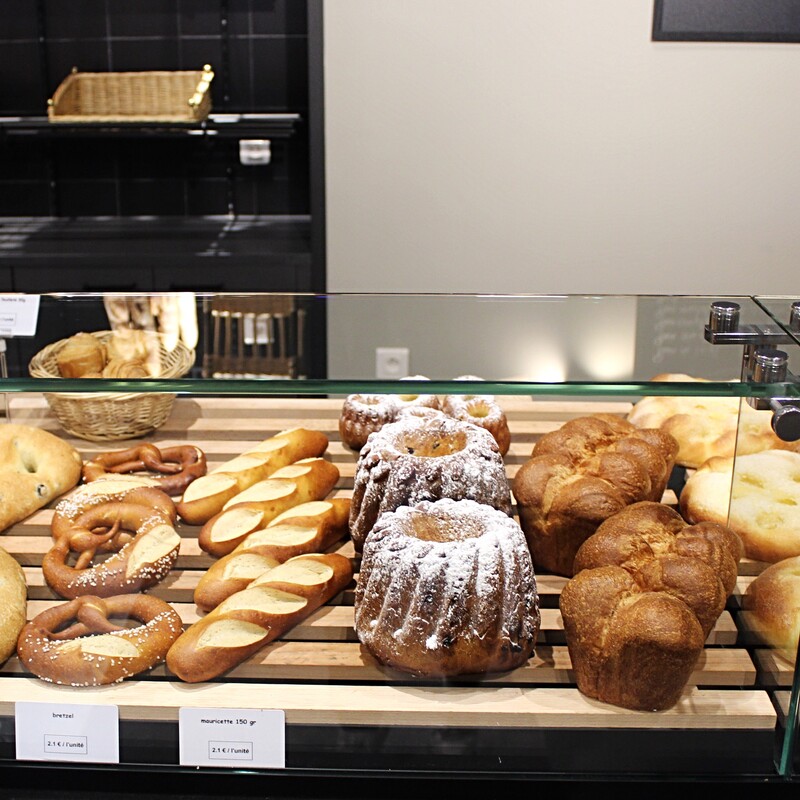 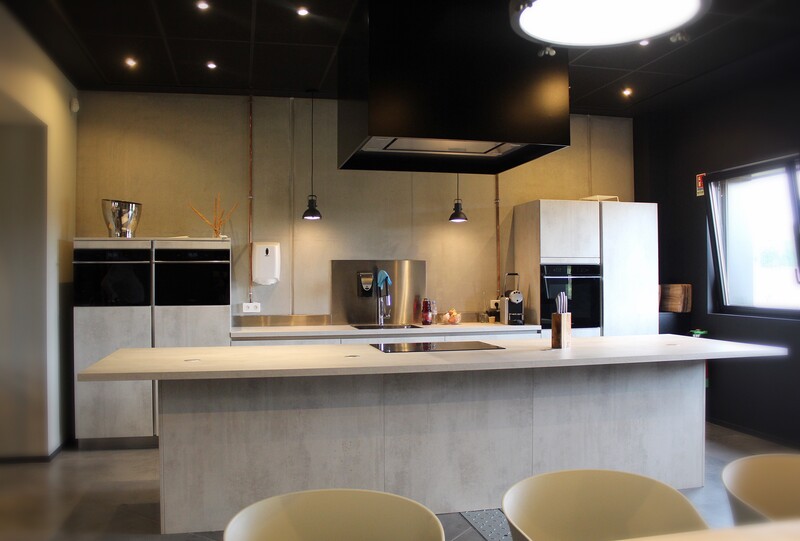 L'Épicerie Maison Dufossé; Exterior - Bakery - One of the workshops dedicated to cooking classes
​​You opened a restaurant in Chengdu, China in 2009.  Why China?
After cooking, my second great passion is football and it was through the training centre at FC Metz that I had the opportunity to go to this fascinating country, more precisely to Chengdu which is a city with 18 million inhabitants situated in the Sichuan province.  The 5-star hotel, Jinjiang was looking for a Michelin-starred chef to open a gourmet restaurant.  I met with the head of the hotel who was himself a former Head Chef.  We were talking the same language and I liked the challenge of opening a restaurant in China.  A year and a half later the restaurant Jin Yue by Christophe Dufossé opened its doors.
For the last two years, I've also been taking care of the pastry and bakery for the whole hotel and we manage the food for private events  such as weddings as well as the VIP part of the hotel which regularly welcomes world figures  such as Angela Merkel, Michelle Obama or even M. Rafarin.

How would you describe your cooking?
I would say that it is an authentic and refined cuisine which concentrates on the essential: the product, the cooking, the flavors.  The product is paramount for me, of course, it must be in season and good quality but just that isn’t enough. In the same way that my dishes tell a story, I need to know the history of the product as well as the producer.  Then it is a matter of working the product with respect, combining the flavors while allowing the product to express itself.  This work must be done in a subtle way and often it’s the memory of the tastes, around an aroma, a spice or a citrus, on my travels that guides me.  If my cuisine is simple, I like to intrigue the palate, to surprise it with an unexpected note.
I would also say that my cuisine is one of sincerity.  It comes from the heart and you can find a piece of my story in each of my dishes.  For example if you take La Langoustine, one of my signature dishes, this langoustine can come from Brittany but also often from Boulogne near the town where I was born.  I combine it with horseradish,  a nod to the Alsace where I grew up and a saffron sauce, referring to some of my travels.  Staying true whilst provoking emotion remains my guiding thread. 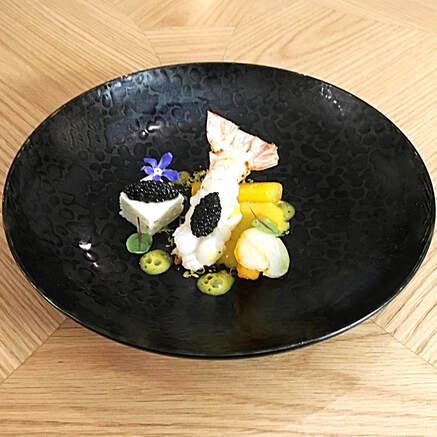 Langoustine at La Table
What are your sources of inspiration?
Inspiration for me is always in the background.  It’s why I always have a little book in which to write my ideas as soon as they emerge, sometimes I add a drawing.  I am a dreamer and I’m convinced that this dreamer part of me, which is innate, plays a large part in my inspiration.   This inspiration can come from many sources like travelling, reading, visits to producers and markets, social media, humor, the seasons...
I would say that the sources of inspiration hide themselves a little bit everywhere.
I also like to involve my teams in menu development, to let them work on an incomplete idea, to open a path for them and leave them to work on it.  For me teamwork is paramount.

How do you choose your suppliers?
Supplier choice is made during my meetings.  I like to feel the passion with the growers and producers who I work with because I think it’s the key.  A good product takes time, it is raised with respect, it demands sincerity, attention to detail, follow up.  The relationship that I undertake with my suppliers is based on trust, we exchange and build up a history together. 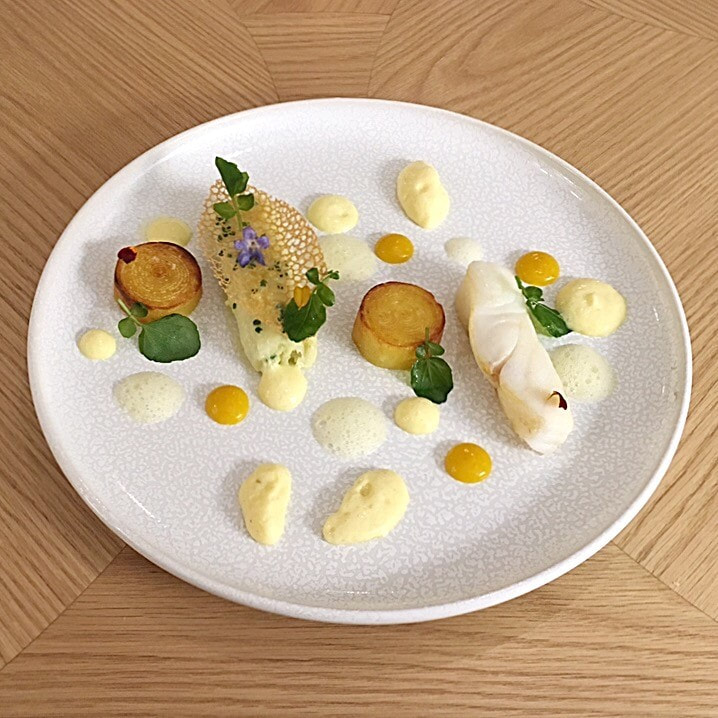 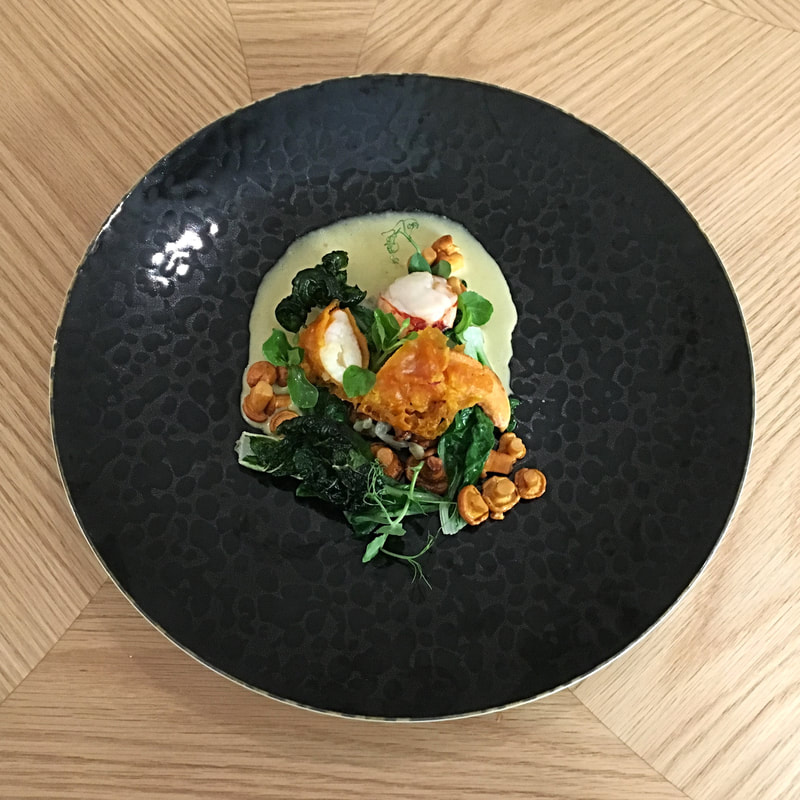 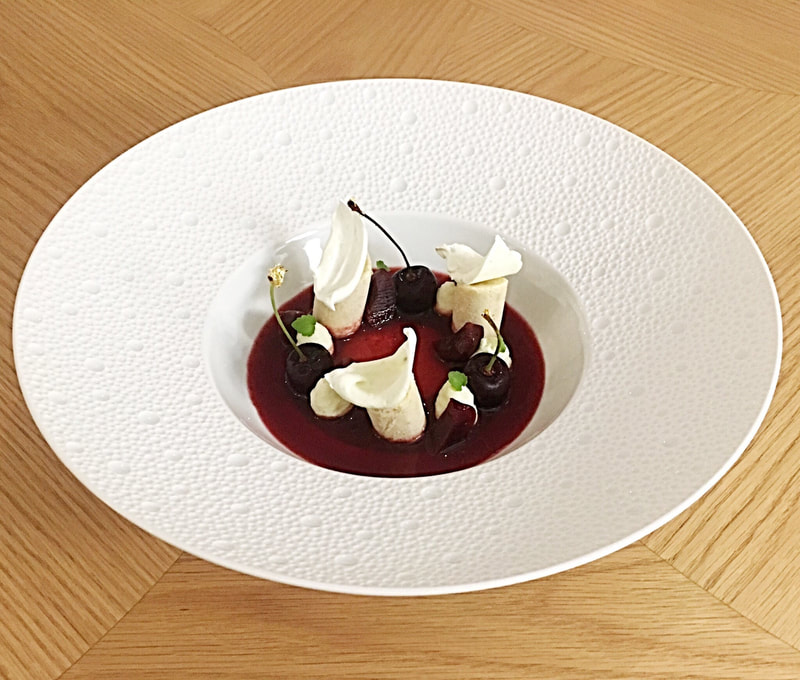 Different dishes at La Table: Roasted Turbot, Organic Vegetables, Potato Fondant  -  Homard from Brittany with Coco-Curry sauce  - Cherries from Lorraine
​What aspects of your job do you prefer?
I like the diversity of my job, undertaking and developing new projects on an ongoing basis.  I feel as much excitement and passion in my kitchen when I work together with my teams as well as when I work on a new project.  I don’t like routine and without doubt that’s why I develop a new project every year and a half to two years. Focusing my development in different areas, allows me to fulfill the needs of various customers with different offers.

What advice would you give to young people wanting to get into the business?
I would say to them to be honest with themselves and only get into the business if they are truly passionate.  It’s a career that demands a lot of work, seriousness and courage and in which one can only fully blossom if one is passionate.  I would also advise them not to be in too much of a hurry, not to want to burn through the stages because the journey is an important part of a chef’s career.  Finally, I would say to them to be curious, epicureans, to travel as much as possible to discover other cultures.
​​ 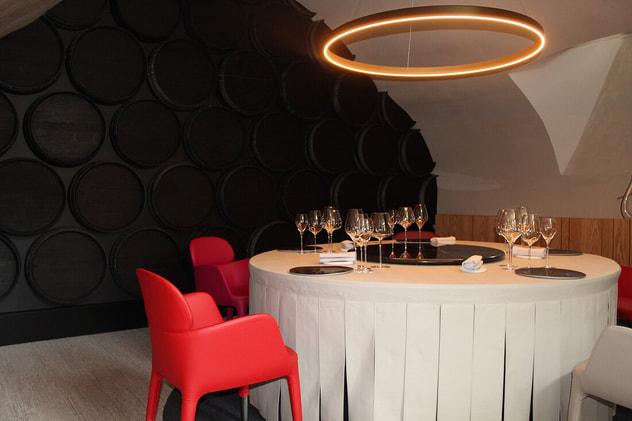 The Chef’s Table: a private space where Chef Christophe Dufossé hosts small parties of 4 to 12 and cooks for them using ingredients they choose in advance from a list of 25 seasonal products.