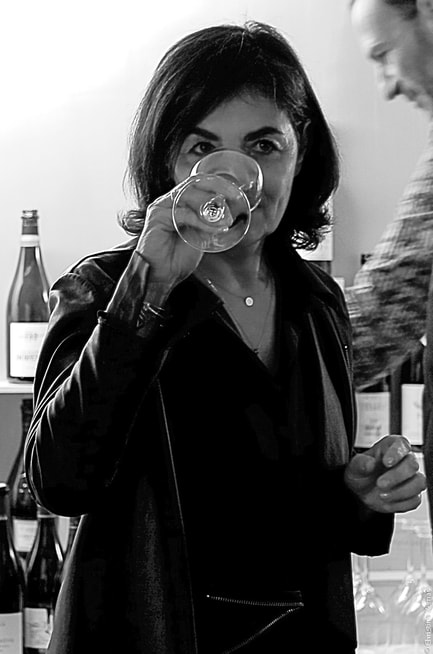 The story of the terroir they come from, the story of the men and women who work to allow them to express themselves whilst refining them.
​
Such is the philosophy of Christine Vernay, a former professor of literature, for whom nothing on paper prepared for the job of winegrower and who nevertheless successfully took over as head of the family estate in 1996.  An estate situated in Condrieu, in the Northern Rhône Valley, on extremely steep hills whose granitic soils combined with an exceptional microclimate, constitute an ideal terroir for the development of the Viognier and Syrah grapes.
It is precisely the love for this terroir, which she has carried in her since childhood, combined with her work and her commitment, which make that the Condrieu, Côte-Rôtie and Saint-Joseph of Christine Vernay are today recognized worldwide with for some, the very precious rating of 100/100.
Reading up on the history of the Domaine Georges Vernay and then a tasting in New York where I was able to appreciate the finesse and exceptional character of Christine Vernay's wines, made me want to know more about them.  A trip to Lyon last July gave me the perfect excuse to contact Christine and her husband Paul Ansellem who kindly let me into their universe for an afternoon.
This was an opportunity for Christine to talk about her path and her projects but also to come back to the history of the two generations before her, her grandfather Francis who planted the first Viognier vines in 1936, then her father Georges who saved this grape variety threatened with disappearance and who worked tirelessly for the development of the appellation Condrieu.
It was also a chance for me to discover a woman of conviction whose choices are guided by her passion and love of her land.
On this boiling hot July day when our walk ended at the foot of Coteau de Vernon where everything had begun 80 years ago, I really hadn’t noticed the time passing…. 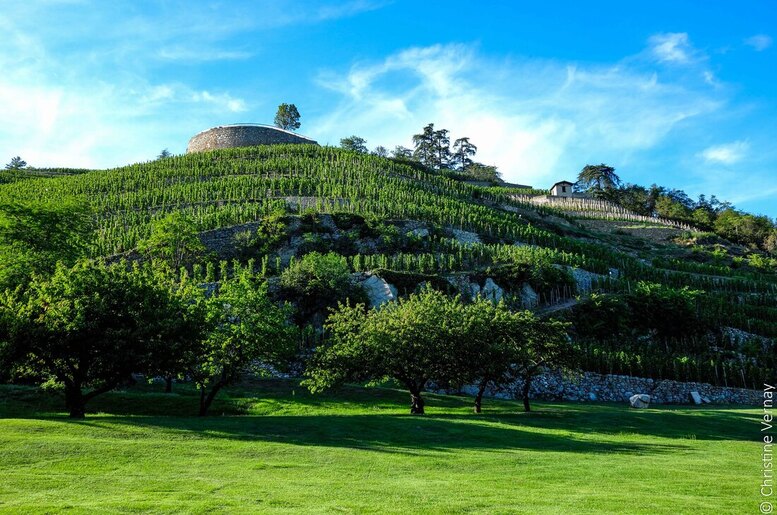 Coteau de Vernon
Your father, Georges Vernay is known for having made viticulture history in the Rhône Valley by reviving the Viognier grape. Can you tell me a little more?
It all started around 1936 when my grandfather planted part of the Coteau de Vernon with Viognier.  This particular year also coincides with the very beginning of appellations in France but the Condrieu appellation did not exist until 1940 in order to design the 5 to 6 hectares of Viognier planted in Condrieu at that time.  So it was my grandfather who started the estate, even though at that time he did not make a living from viticulture but rather from polyculture, growing fruits and vegetables in addition to vines.  From the beginning, he produced and bottled the wine from his vines, which was not a common process at the time.
My father took over from my grandfather in 1953 and made a commitment to develop viticulture and restore the terraces on the Coteau de Vernon to plant Viognier.  Most of these terraces were fallow and their hard and sheer character meant that no one believed in the viability of their restoration which required monumental work as it was entirely manual in difficult conditions.
But my father believed from the beginning in the specificity of our terroir and that’s why many nicknamed him the “Pope of Viognier.”  He believed in this grape variety and he did a lot of work for the development of the appellation Condrieu, not only on his estate but also by helping and advising other winegrowers.  He was also president of the “Association de Défense du Condrieu” for 30 years.

I grew up with this idea of terroir which may seem obvious today with the commercialization of the concept of terroir wines but which was not necessarily so at the time. I have always heard my father speak with emotion about this land, this unique terroir impossible to reproduce elsewhere. This vision, this love of the terroir are essential for me.  You have to be in love with the land to take good care of it.
I have just restored part of the terraces myself to plant new vines. It’s a process that has no economic justification because the nature of these soils means that it can only be carried out manually, which makes it very expensive.  It’s justified by my attachment to the land and my duty to preserve it.
​ 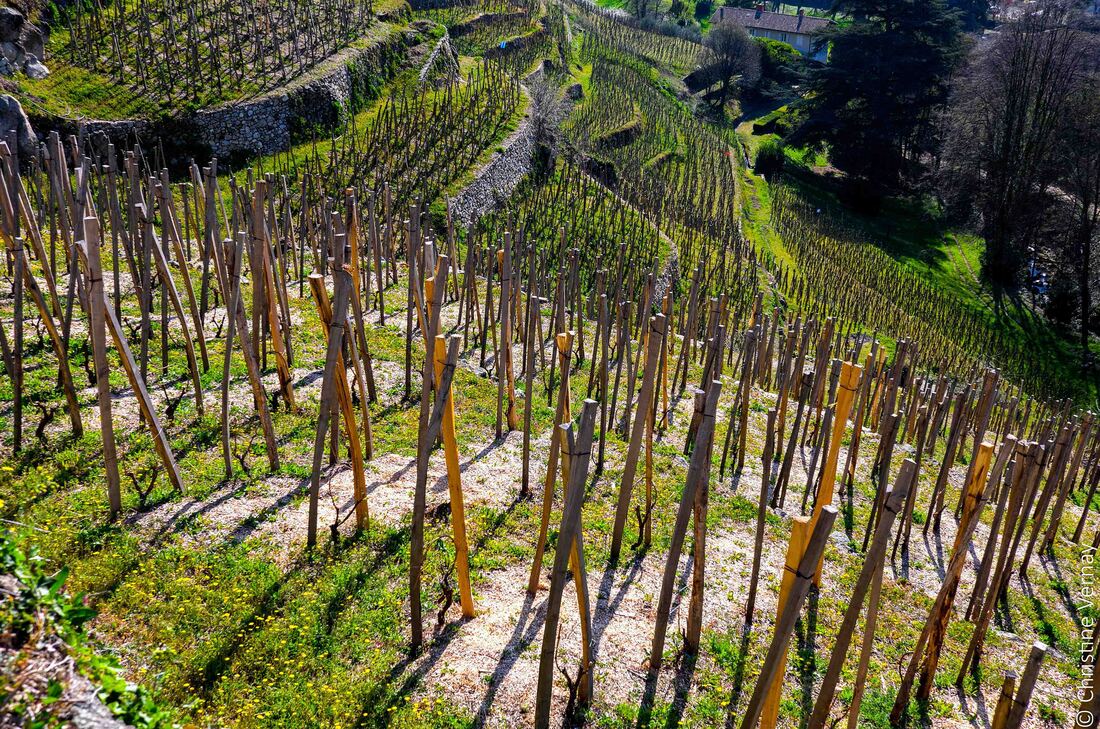 Part of the terraces which have been restored
​You are now the head of the Vernay Estates. When did you know you wanted to take over from your father?  Were you prepared?
I never really knew, and nothing prepared me to succeed my father if not my history.
It is true that I was born on this estate and when you are born into a family business, everyone participates from a young age, whether it is sorting grapes or participating in bottling.   As girls grow up, however, they are quickly separated from the production.  As a teenager, I helped my mother more with administrative matters, ordering, shipping and receiving customers.  Contrary to my brothers, my father never took me to work on the vines, but as soon as I was old enough, he let me taste the wine.
I then went to Paris to study literature and begin a teaching career. That's where I met my husband.
At no point did I plan to be my father's successor. For me the estate as I knew it was my parents’ work, it was their story.
Until one day my parents told us they were going to stop and retire. It was only then that I began to imagine that maybe I could fit into that story.  My brothers were also gone and weren’t interested in taking over.
Today, I am grateful to my parents for allowing us the freedom to choose and for allowing me to grow up away from here and to learn who I was, before making the choice to come back.


How did you handle your return and especially the fact of being a woman in a rather masculine world?
It took a little adjustment.  I had never felt a divide between men and women during my teaching years in Paris.  When I came back here, I found myself faced with a very different world that was not used to including women in it. At first, for example, people would rather ask my husband technical questions or ask him how the harvest was expected to go. It wasn’t done with malice or disrespect, but perhaps with some discomfort in talking about winemaking with a woman. When the winemakers met after the harvest, it wasn’t the done thing for a woman to mingle with them.
Today, things are changing and more and more wine-growers' daughters are taking over the family estate.  That was not the case 20 or 30 years ago. This new diversity brings a richness to the world of wine with a different approach and a different view.

As far as the profession of wine grower is concerned, I have never received any formal training. I worked with the team on my arrival. In the early years, my brother Luc, who had worked with my father before leaving, returned for the harvest. We worked together on my first vinification in 1997.
At the time, I was very concerned with vinification. I thought everything happened in the wine cellar. My primary concern was getting the grapes into the cellar and how I was going to process them into the bottle. I understood very quickly that the key parts of the process didn’t happen in the cellar but on the vine and that the quality of the grapes depends on the way in which you look after the vine.
Once I understood this, I decided to move to organic farming, also because for me, the preservation of our terroir is achieved by respecting the soils. It has been a complicated choice for our terraces where it’s impossible to use mechanical devices but it’s been about fifteen years since we have moved to organic farming the whole area, even though it is only four years since I started the certification process.
The transition to organic farming is a personal conviction and I didn’t initially deem it necessary nor useful to start the process of certification. Today, this certification, beyond my personal conviction, allows me to convey the message that organic farming is possible even on our steep hillsides. I can already see that it is attracting interest and questions from some of my fellow winegrowers. 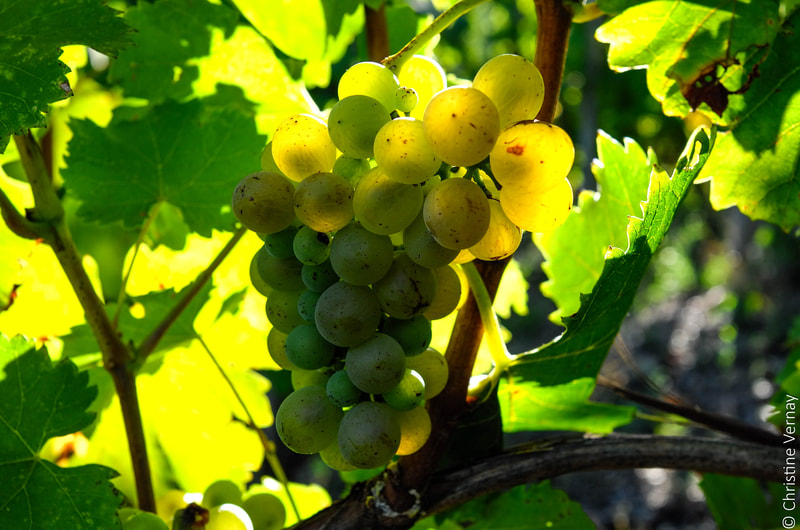 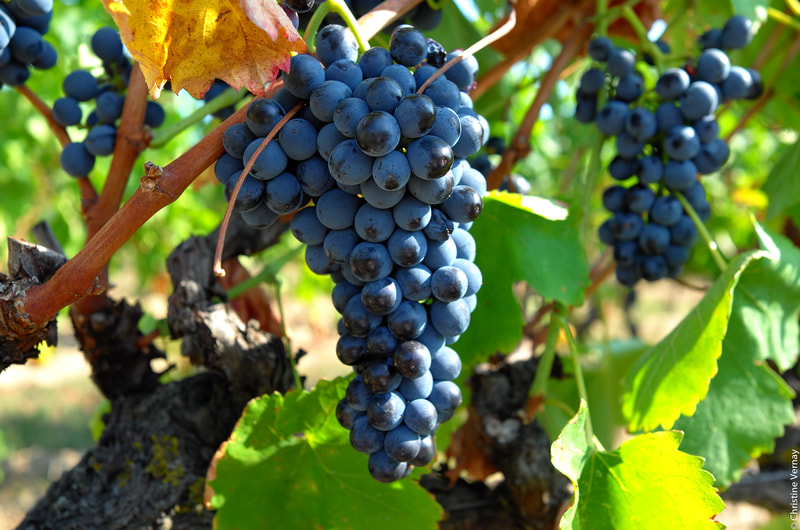 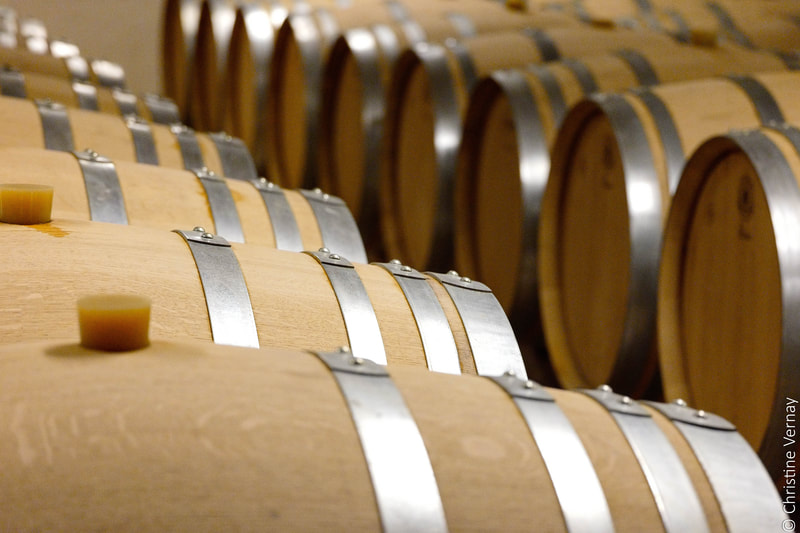 ​
How would you define the character and style of Georges Vernay wines?
It is always difficult for me to define my wines, so I will return the question and tell you what people usually say when they talk about it. As far as the whites are concerned: an unusual freshness for Viognier since it is a grape variety that has no acidity. This freshness, this salinity and this lightness are characteristic of my Viognier. Likewise, my Syrah reds are not characterized above all by their strength but by their elegance and delicacy. I'm not looking for strength in a wine. I'm looking for depth.


For you, what is a successful wine?
For me, a successful wine is one that tastes like the place where it was produced.
​It is also a balanced wine in which one finds the various flavors like acidity and bitterness and a wine that leaves a nice taste on the palate. 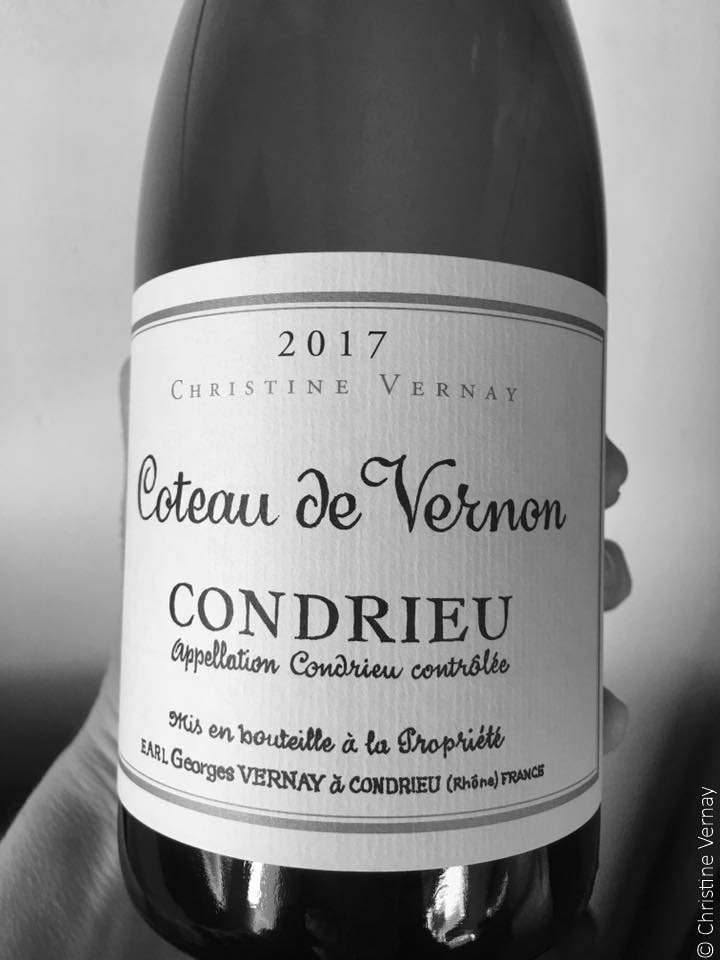 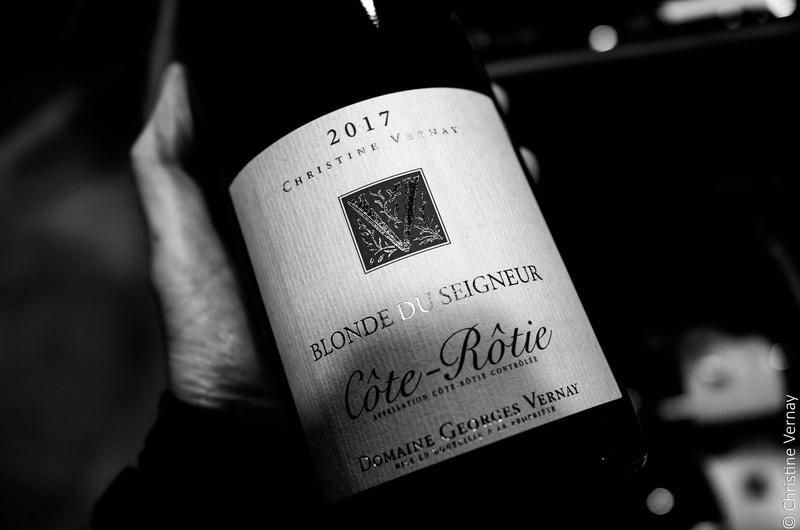 ​
What aspects of your job do you prefer?
I like every aspect of my business, from working on the vine to working in the cellar.
We just finished planting terraces that my father had never been able to restore. The rebirth of these terraces was for me an immense joy.
The work that is done in the cellar is just as exciting: to take care of the grapes and look after them until they are bottled by trying to make the right choices ; to discover it ; to taste it …


Do you have any plans, any hopes for the future?
For me, it's all about continuing what we've been doing for three generations, with the same passion.
One of the projects that is close to my heart would be to move towards biodynamics. I started this year to try it out on a small part of my land. I am not sure that there is a big difference in wine between organic farming and biodynamic farming, but the approach seems interesting to me, especially because it involves a lot of experimentation, reflection and observation on the part of the winegrowers and an even greater symbiosis with nature. 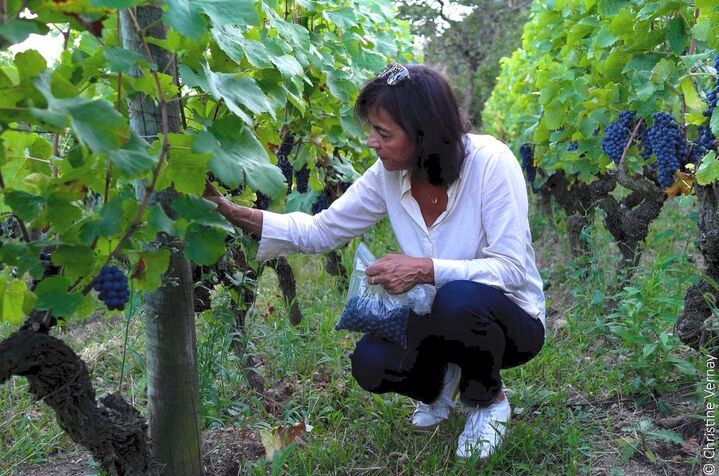