​Modern health-driven Cuisine
Bouley at Home, Chef David Bouley’s counter seating restaurant, which opened in 2017 in the heart of the Flatiron District, is unique in the New York food scene!
More than a restaurant, Bouley at Home is a place dedicated to sharing the pleasure of good food and how, with the right choice and combination of ingredients, it may benefit your health and wellness.
The sleek rectangular 32-seat space is conceived as an ultra-modern kitchen. It features three cooking stations and Bulthaup counters where guests can enjoy their meal while watching Chef de Cuisine Daniel Drexler and his team at work and interacting with them.
Chef David Bouley strongly believes that food should not only be delicious, but also service your body and mind and be shared in a joyful environment. Food is life, and this is what Bouley at Home is all about.

For whom
Anybody in search of a meaningful dining experience in a relaxed and communal atmosphere.
Although not entirely a gluten-free restaurant, Bouley at Home is an excellent choice if you’re looking for a restaurant with great gluten-free options, including desserts. 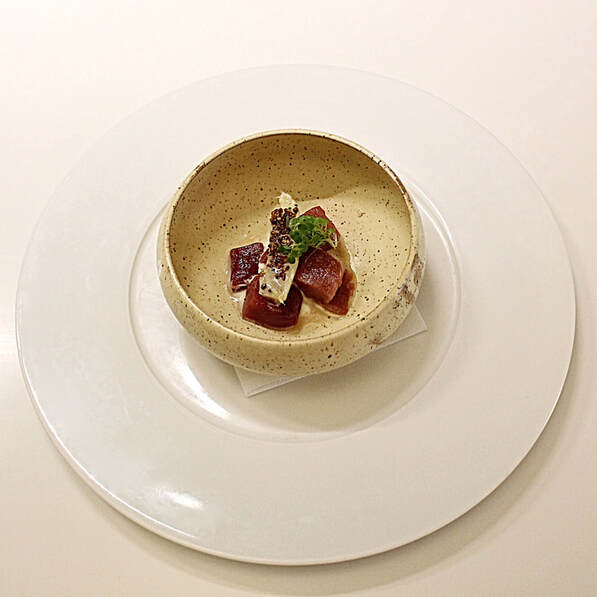 First of the Season Blue Fin Tuna, Wellfleet Cape Cod
​Story
Although the name Bouley is very French, Chef David Bouley was born in Connecticut as his grand-parents had left France in the 40’s.
It was only in 1976 that he first went to France to study Art at University La Sorbonne in Paris and began to work at restaurant Chez Honoré to make some money.
This is where he understood that cooking was what he was meant to do. There, he also met some of France’s most famous chefs, including Gaston Lenôtre who, among other things, taught him how to perfectly whisk the egg whites until soft peaks form. After interning at world-renowned restaurants helmed by great chefs such as Paul Bocuse or Frédy Girardet, David Bouley worked at restaurant Le Moulin de Mougins near Cannes, under Chef Roger Vergé who is known to be the inventor of La Cuisine du Soleil (cuisine of the sun). He learnt a great deal with Chef Vergé, including how to run a restaurant.
Chef Bouley came back to New York in the 80’s and worked for several restaurants before opening his own eponymous restaurant Bouley in TriBeCa in 1987, which quickly became one of the most notable dining destination in NYC.
Among many accolades, Bouley earned several four-star reviews in the New York Times, seven James Beard Foundation awards and 2 Michelin Stars.
His strong focus and research on food and health connections also won him a lifetime achievement award from Dr. Peter Green, Director of the Celiac Disease Center at Columbia University.
Restaurant Bouley closed in 2016 as Chef Bouley wanted to study the science of food more closely and focus on his new project Bouley at Home with the aim of changing the way people think about how food should be sourced, prepared and eaten. Bouley at Home was awarded one Michelin Star in 2018, less than a year after its opening.
​ 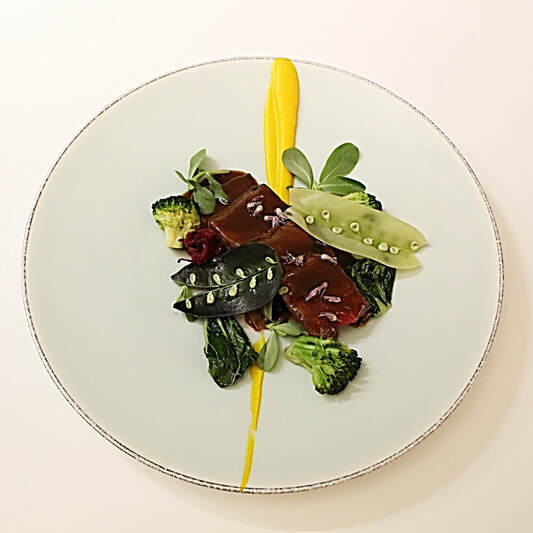 Wild Grazed Canadian Buffalo
​​My Experience
Bouley was one of the first restaurants I went to when I first arrived in NYC 10 years ago. I loved going there. The food was always amazing and the service impeccable.
I was sad when Chef Bouley announced that the restaurant would close but eager to discover what he would do next.
This is why I visited Bouley at Home the first month of its opening and have returned many times since then for lunch or dinner.
I just love Bouley at Home! Not only for Chef Bouley's sincere and beautiful cuisine, but also for the experience. While enjoying dinner, you can watch the amazing team at work and ask questions about techniques, ingredients and their health benefits.
I won’t describe all the amazing dishes that I’ve had at Bouley at Home, but I can tell you that there were all sublime and delicious like the Forager’s Treasure of Wild Mushrooms, one of Bouley’s signature dish prepared with grilled toro, sweet garlic and spices ; the First of the Season Blue Fin Tuna made with Miso cream, white asparagus, toasted buckwheat and vanilla oil or the Wild Grazed Canadian Buffalo served with Chantenay carrot purée, black radish sauerkraut, young broccoli and organic snow peas.

When I asked him about his creations, Pastry Chef Etienne Le Bastard explained that David Bouley’s food philosophy completely changed his approach to desserts, which he translates with low sugar, no additives, no food coloring and when possible no gluten. His creations all have that elegance, lightness and purity of taste that I love in desserts, like the Raspberry Vacherin, prepared with basil, lime and meringue, the Poached Local Apricot paired with lemon verbena and lavender yogurt ice cream or the Organic Spring Rhubarb served with lemon verbena cream, elderflower and yuzu yogurt ice cream and poached almonds.

If you go to Bouley at Home for dinner, you will probably have the opportunity to see Chef Bouley himself and I would encourage you to have a chat with him as it is truly fascinating to hear him speak about how he sources his products and how he is constantly studying the science of food by experimenting, working with doctors and traveling to Japan to hone his skills and knowledge about the many health benefits of the ingredients and the way they must be prepared.

At the same address as Bouley at Home, you will also find Bouley Test Kitchen and Bouley To-Go, a tiny café where you can buy Bouley’s wonderful breads.
Bouley Test Kitchen is not only a private 100-seat venue but also a place where Chef Bouley hosts his “Chef and the Doctor Series”, a range of interactive educational events bringing together world-renowned practitioners of preventive and integrative medicine. I recently attended one of them.  The theme was “Cancer Fighting Foods: Can your Diet Prevent Skin Cancer?, with Dr. Julie Russak.
The event began with a reception with passed canapés, followed by a presentation by Chef Bouley and Dr. Julie Russak, and a five-course dinner with wine pairing, inspired by the theme of the night and created by Chef David Bouley.
It was truly fascinating to hear both of them speak about how food is the best medicine.

Once you walk through the entrance to all three spaces at 31 West 21st Street, you are greeted by beautiful walls of red apples which emit a wonderful smell which sets the tone for an extraordinary experience which will probably change the way you think about food... 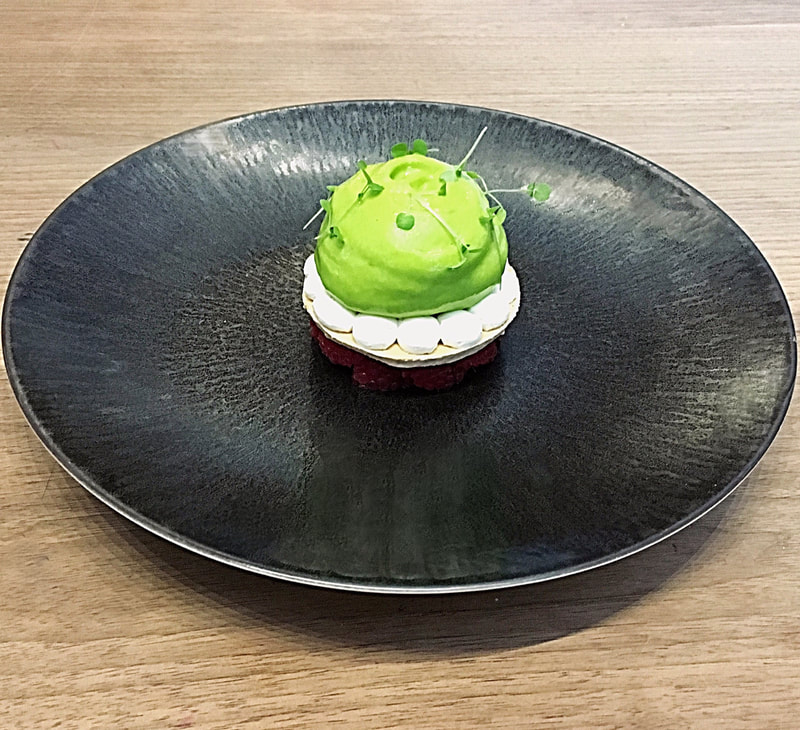 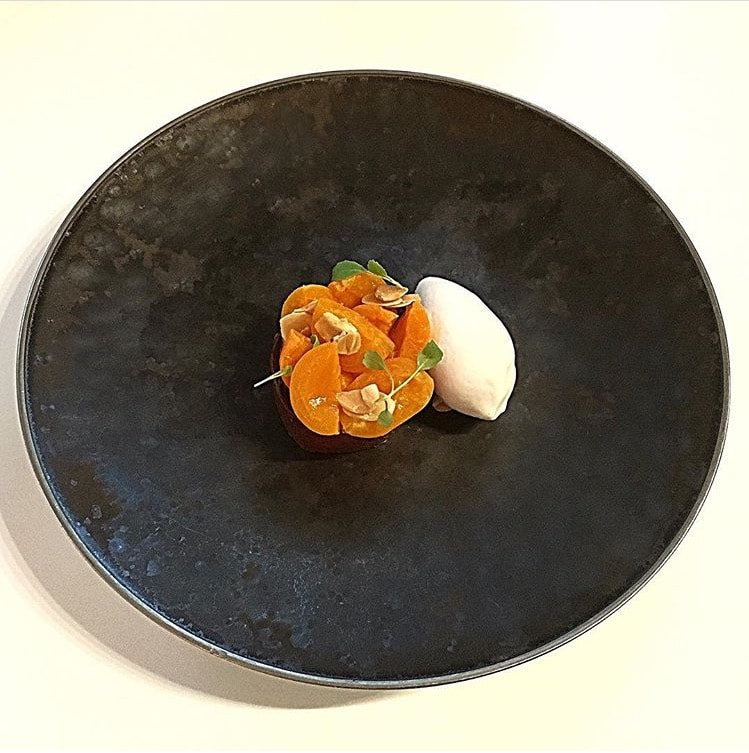 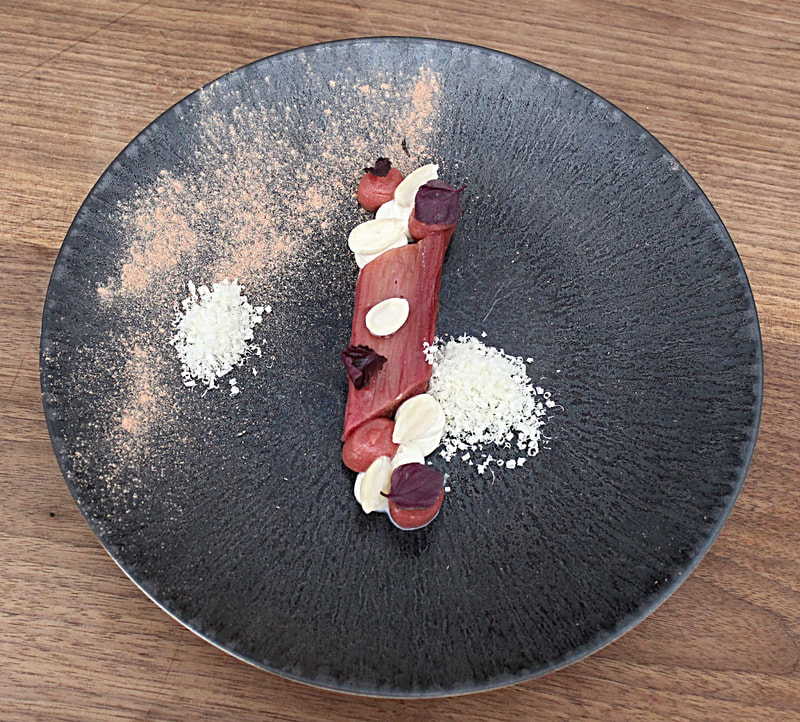